Around the corpus of early medieval documents: typologies, texts, contexts

The work of Dario Internullo starts with the revision of the entire corpus of documentary papyri written in Italy between the fifth and the end of the eighth century. The papyri are part of a larger collection extending up to the 11th century (overview).

Documents were mainly stored in the Archiepiscopal Archives of Ravenna as in the Archives of Saint-Denis. The map below indicates in brown the archives containing one or two documents (usually papal ones); in blue the small groups of papyrus documents corresponding to the labels attached to the relics of the saints. 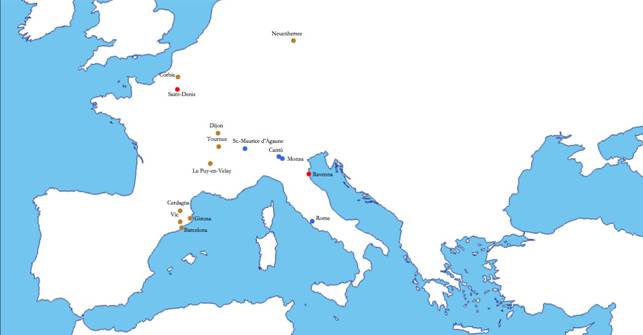 As for the typological subdivision of the documents, a catalog based on diplomatic criteria is available on this site. The first distinction made by the catalog is between public and private documents, a distinction which makes difficult to place the Epistolae: Even if most of the public documents were drafted in the form of letters, these letters do not respect the normal formalities followed by the records offices.

Public documents certainly constitute the most consistent documentary nucleus. Among them there are the protocols of the Gesta Municipalia or rather the minutes of the hearings that took place within the urban curiae. Indeed it happened that the citizen who was part of a patrimonial transaction should present the document attesting his settlement to the curia in order to register it in the public archives. The procedure had fiscal reasons but it was also aimed at the legal guarantee of the asset (somehow the same could be said of modern transcription systems).

The copies of the minutes released  look today like long papyrus divided into columns, written in solemn writings of the late Roman type. The minutes followed the form of the judicial debate: direct speeches within which the documents recorded are contained. 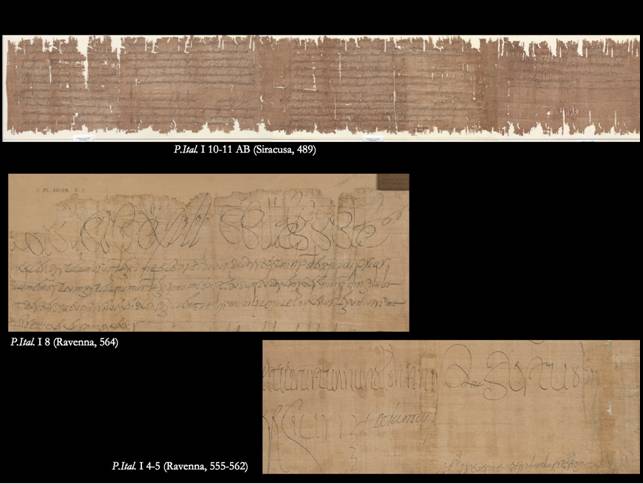 These papyri have come to us thanks to the Archbishops of Ravenna who used them as munimina for their real estate.

It is also worth mentioning the so-called Papyrus Butini considered both as the ideal type of the records office’s acts of late-Roman civil servants and the matrix of late-Middle Age chancellery. 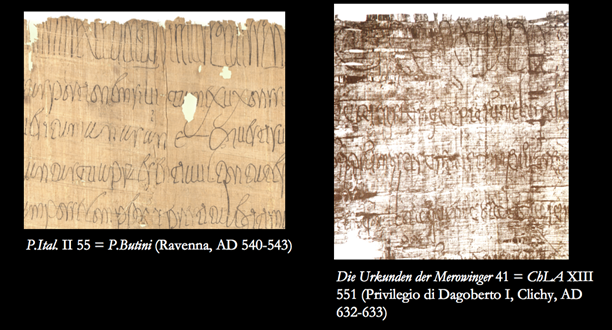 The same form (long rolls) is shared by all the private acts and do not differ particularly from the coeval parchments of the Langobard archives. The writing is Latin as well as Gothic and Greek.

The third typological category are the brevia, that is internal administrative documents.

As for the unpublished, several papyri were found in the ligatures of the early medieval manuscripts or in the covers of the books. 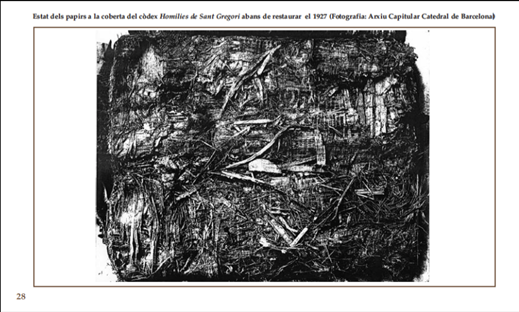 The first important question is where writing materials were produced and conserved in the medieval West, and where they circulated.

As for the first problem (places of production), medieval historiography identified the main productive hub in the Arab Sicily on the basis mostly of economic reasons. According to Internullo the thesis is not fully persuasive. The main source that supports the pro Sicily theory is a letter written by Gregory the Great that mentions a Sicilian toponym called “massa papirianensis”. In most massae, however, the name did not indicate the type of production but the most important of the fundi of the mass (which often brought the name of the owner). Massa papiriensis” could therefore derive from an ancient Papyrius.

The second source consists instead of the report of an Arab merchant who, around of the 10th century, visited Sicily and reported to have found paper mills near Palermo. Even in this case, however, the proof is not decisive. The merchant, in fact, seems to refer to a minimal production used by the local emir for his deeds and little else.

Sources referring to Egypt are considered more persuasive. In order to understand why, we must go back to Rome and to the Liber Pontificalis (whose complete version dates back to the 6th century). In the Liber we find lists and inventories identical to those held in Ravenna for the territories donated by Constantine to Pope Sylvester. Among other properties, Egyptian and Syrian companies are listed as the properties that provide the popes with the great amount of paper necessary for the administration. Later sources seem to suggest that the basis of the papyrus production circuit remained the same until the 9th and the 10th centuries. It seems important to point out that the only protocol (a kind of “factory mark”) preserved together with a Western papyrus in France is identical to those found in Egypt and dating back to the 9th/10th century, an evidence that is consistent with the mention in Roman sources of Oriental products arrived in Rome exactly from Alessandria.

As for the circulation, the mapping proposed during the seminar suggests how the geographical dislocation of the papyrus has been quite large until the second half of the 8th century, reaching the innermost areas of the peninsula. Starting from the 9th century, nodes and destinations began to be reduced to cities on the coasts and better connected to Mediterranean traffic.

During the same period, the parchment established as the main writing support. Its diffusion followed trajectories which were diametrically opposed to those of the papyrus. The documents found in England and northern France date back to the end of the 7th century. Furthermore, from the 8th century onwards the parchment began to reach other European locations, including internal areas of the Italian peninsula and nodes of Mediterranean circulation.

The explosion of the parchment sources was probably due to an economic contraction. Emanuele Conte suggests within the debate that the “material explanation” could be insufficient. There could be historical-legal reasons behind the disappearance of the papyrus: the choice of a more expensive and resistant material such as parchment could depend on the juridical nature as well as on the function of the document. The validity of the document over the centuries and therefore the importance of a strong writing material should also be taken into account independently from the public authority who originally provided the guarantee.

According to Dario Internullo, the problem of practical utility of the writing materials was probably considered by the writers.  A demonstration is offered by the practice of adding sheets in order to update the rolls, a practice that survived the transition from papyrus to parchment for instance in the so-called “polypthycs”. On the second question he observes that the registration of the transactions included the formula with which the contractor requested a copy of the report as munimen, while in Justinian texts or in some Merovingian legal sources, evidence of requirements concerning the support (eg “sive in membranis sive in cartis”) are present. Victor Crescenzi underlines how the legal papyri are perhaps the only evidence of the relationship between recording, validity and effectiveness of the document itself.  There aren’t other evidences of the same age about the so called insinuatio in gestas, that is the notification of the deed to the Gesta Municipalia

The revision of the corpus of medieval papyri could hopefully contribute to reconsider even some of the most consolidated historical theses. It’s the case, for example, of the papyrus which inspired most of the research on the genesis of manorial system. According to the date proposed by Internullo on the basis of paleographic and economic data, the papyrus would fit perfectly into the period between the second half of the 6th century and the beginning of the 7th, leading to a reconsideration of the forms of agricultural organization in the focused areas.

Finally, new light could be thrown on public documentary production in Ravenna. Starting from a new dating of the Butinì papyrus, it is indeed possible to reflect on the fact that it is a document issued by a chancellery in which, up to a few years before, the letters of the Ostrogoths were written (the same reported in the Variae of Cassiodoro). It is no coincidence that the form of the papyrus and that of the Letters coincide. From here we can perhaps begin to reflect on the public documentary production in Ravenna in a more general way, starting from the late-ancient epoch to get to the bishop’s Ravenna.